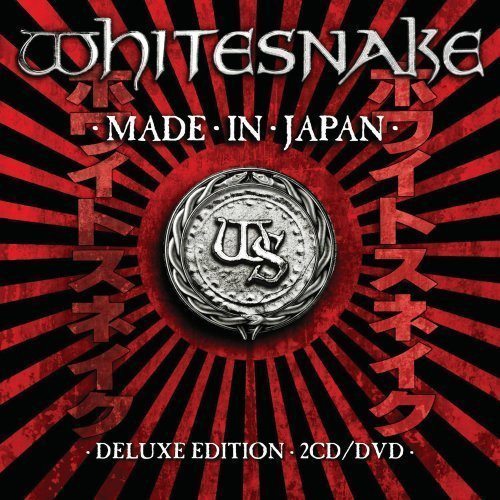 The performance was initially recorded for Japanese TV and future Loud Park promotions, but after three songs were broadcast on a Loud Park highlights program in Japan, Whitensake received unprecedented requests for this performance to be made available for general release.

Having spent most of 2012 editing and mixing the Japanese concert in stunning HD as a multi format DVD-CD in 5.1 and stereo, just prior to commencing the ‘Year Of The Snake’ 2013 World Tour, this exceptional performance is a welcome addition to the history of Whitesnake live releases. Now fans can relive the irresistible magic of Whitesnake in concert any time their heart and loins may desire!

The ‘Forevermore’ songs alone are worth the price of admission, not forgetting the classic Whitesnake songs, “Is This Love,” “Still Of The Night” and “Here I Go Again,” all peformed at the height of their musical powers. It’s all here. This is what Whitesnake fans, new and old, have been clamouring for. Highlights include blistering guitar work from the band’s six string guitar slingers, Doug Aldrich and Reb Beach, who both celebrate their 10th anniversary with the band this year.

After hearing the sound check recordings from the different Japanese venues, the band decided to include them in the package as special bonus content. They agreed that everything would be related to their 2011 Japanese tour. So, when you think about it, it is appropriate they’ve called the project “Made In Japan.”

Another amazing night to remember and to share with all the fans!

“Don’t be shy…C’mon…Make Some Fucking Noise!!!”

2. Give Me All Your Love Tonight

8. Love Will Set You Free

10. Fool For Your Loving

1. Love Will Set You Free

2. Steal Your Heart Away

4. One Of These Days (Acoustic Version)

5. Lay Down Your Love

7. Good To Be Bad (Acoustic Version)

8. Tell Me How (Acoustic Version)

2. Give Me All Your Love Tonight

8. Love Will Set You Free

10. Fool For Your Loving

14. Steal Your Heart Away (fan video)

Whitesnake has a respected reputation as one of the world’s leading rock’n’roll bands. Founded and formed by Deep Purple singer David Coverdale, the band have earned multi-platinum albums and multiple top 10 hits worldwide, including 2 number 1 smash hit singles with Here I Go Again and Is This Love, and more recently with Still Of The Night.

Bombast, bravado, talent and passion has established Whitesnake as the perennial platinum favourite they have become. They return to the sonic fold with a vengeance in 2013 with the Made in Japan live album and DVD ahead of their May 2013 UK arena tour with Journey and special guests Thunder. “Unfinished business,” as Coverdale says slyly. “We all wanted the last tour to continue as we got closer to the end. After a year in the studio we’re ready to rock on stage again. We’re coming back for more.”

Harnessing Coverdale’s blues and soul roots and fuelled by incendiary guitarists Doug Aldrich, Reb Beach and bassist Michael Devin, you have all the elements that comprise Whitesnake’s rock credentials. On the upcoming UK tour Whitesnake will be joined by the Tommy Aldridge on drums and percussion.