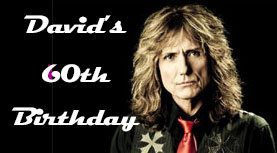 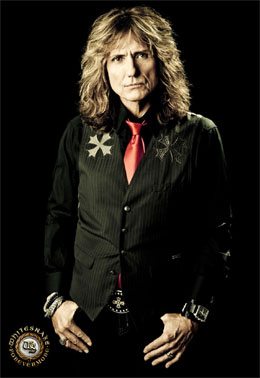 Legendary Whitesnake singer David Coverdale will celebrate his 60th birthday on September 22, 2011. His latest studio record Forevermore released on March 25th shows experience, musical maturity and personality that is far from jaded after an almost 40 year career. Evidence shows that the career of the founder/singer/songwriter of Whitesnake is far from finished even if Coverdale has evoked the end quite a few times in the last years. “I’ve retired more times than Frank Sinatra—but luckily I didn’t tell many people,” he laughs. “I am utterly blessed to be able to do what I do, but the music business can also be exhausting and destructive on a person. It’s important at times to step back and take stock of your situation and circumstances,” Coverdale confessed.

Today David Coverdale is happy that he never totally stepped away. He recently wrote a song called “Best Years” that he says perfectly describes his life with his upcoming birthday. He explains, “It’s great that I’m able to still work as a musician with continued consistency in my career while also experiencing a supportive and fulfilling private life. I really am experiencing the best times of my life these days, and believe me I’ve experienced a lot…”

Forevermore is Whitesnake’s eleventh album, released on Frontiers Records. The band is still recognized as one of the most successful acts of all times with several platinum awards. Through his eloquent, always cultivated and charming British personality, David Coverdale is not only known as one of the “true” rock stars, but also as a highly regarded gentlemen within the rock business. Not a lot of musicians deal with love and passion as successfully in their lyrics as David does, and even fewer are able to highlight those lyrics so perfectly within thrilling blues and soul anthems.

Before Coverdale (who’s originally from Saltburn-by-Sea area) founded Whitesnake, he was the lead vocalist for Deep Purple. When Coverdale celebrates his 60th birthday on September 22nd he’s able to look back at a musical career that is almost 40 years long. “I’m going to celebrate my birthday with my private family and my musical family,” he reveals. “I plan on celebrating several times on several different continents actually! Even if it sounds a little un-rock and roll, I will use the actual day to reflect and be thankful for what I’ve achieved in my life so far. I’m incredibly grateful to still be experiencing professional success, and to be so physically active in what I do after all these years.”