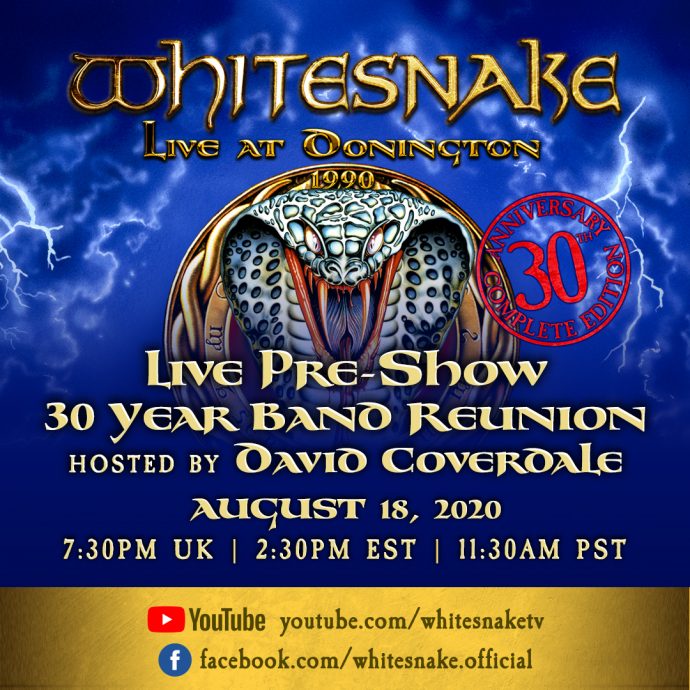 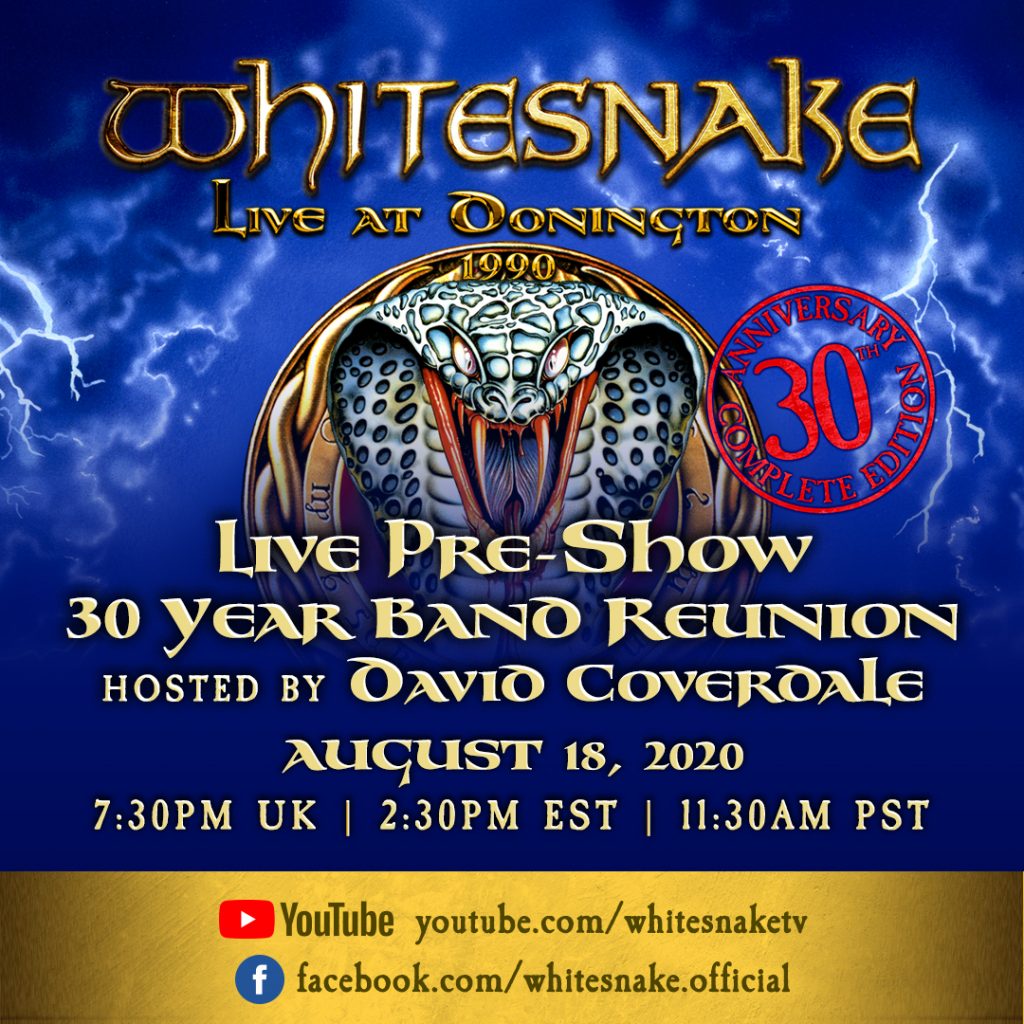 To Celebrate The 30th Anniversary Of The Live Performance, A Remastered 17 Track Collection Of The Band’s Full Performance Will Be Released Digitally On The Same Day

LOS ANGELES – Whitesnake are celebrating the 30th Anniversary of their legendary set at Monsters of Rock with a new streaming concert, Live At Donington, that will feature the band’s classic live performance the official Whitesnake YouTube channel. The screening will be preceded by a live, on-camera pre-show and Q&A with David Coverdale, Steve Vai, Adrian Vandenberg, Rudy Sarzo and Tommy Aldridge, who will reunite for the first time since they finished their “Slip Of The Tongue World Tour,” in celebration of this memorable event. The Q&A stream will go live on Tuesday, August 18, at 11:30AM PST on the band’s YouTube channel and Facebook page. The concert broadcast will take place at 12:30PM PST, the exact same time as the band took the stage 30 years ago in the UK.

On the same day, Whitesnake will release LIVE AT DONINGTON 1990 (30TH ANNIVERSARY COMPLETE EDITION), a remastered 17 track collection of the band’s entire performance, digitally. All of the songs from the performance have been remastered. This new digital collection includes a mix of hits and deep tracks, including “Is This Love” from Whitesnake’s multi-platinum self-titled album and the #1 smash “Here I Go Again.” There are also four instrumental tracks that feature virtuosic guitar solos including, “Adagio for Strato,” “Flying Dutchman Boogie,” “For The Love Of God,” “The Audience Is Listening” and an explosive drum solo from the extraordinary Tommy Aldridge.

“I can’t wait to be reunited with Steve, Adrian, Rudy and Tommy, even if it’s just for this online moment…” says Coverdale. “They were without a doubt one of the best, most explosive, exciting musical collectives I’ve ever had the pleasure of sharing a global stage with…super people, super musicians…an absolute SUPERGROUP!!!”

This performance at the  Monsters of Rock festival in Donington, U.K.  marked their third appearance and second time headlining the famous festival. The band had recently released their third consecutive platinum record and eighth studio album, Slip of the Tongue. Originally released in November 1989, it peaked at number 10 on the U.K. and U.S. album charts.  In 2019, Rhino released a 30th Anniversary Edition of the album, along with a unboxing video featuring David Coverdale which can be found here.