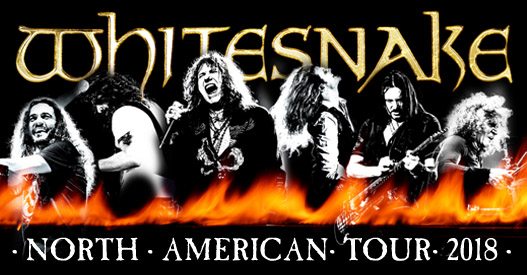 David Coverdale…Whitesnake Lead Singer “We are truly excited & looking forward to playing in 2018 with Foreigner and my dear friend, the exceptional Jason Bonham, on their North American tour”

Appearing as very special guests on the Juke Box Heroes tour whilst celebrating their 40th Anniversary are the legendary WHITESNAKE, who carry a rightful & righteous reputation as one of the world’s leading rock’n’roll bands.

Founded in 1978 by former Deep Purple singer David Coverdale, the band have earned multi-platinum albums including ‘TROUBLE’, ‘LOVEHUNTER’, ‘READY AND WILLING’ and ‘COME AN’ GET IT’ through to the explosive hard rock of the revamped ‘SNAKE sound with the multi-platinum ‘SLIDE IT IN’ & celebrating its 30th anniversary, 1987’s self-titled mega-million-selling smash-hit album, ‘WHITESNAKE’. From these albums came multiple top 10 hits worldwide, including 2 number 1 singles with “Here I Go Again” and “Is This Love” as well as the unforgettable hammer of “Still Of The Night” all leading to virtual 24-hour domination of MTV around the globe.

Tickets go on sale to the public at 10am (local time) on Friday December 8.  But because you’re a rock star for being here, you can jump the line and purchase on Thursday noon using the code wh1t3snak32018  Check the Tour page for purchase links.

A special VIP Package is also available which includes:

Check out the tour at any of the following stops, with more dates to be announced in the coming weeks and posted on our tour page. Fans can also check out livenation.com for updates on tour dates and news.