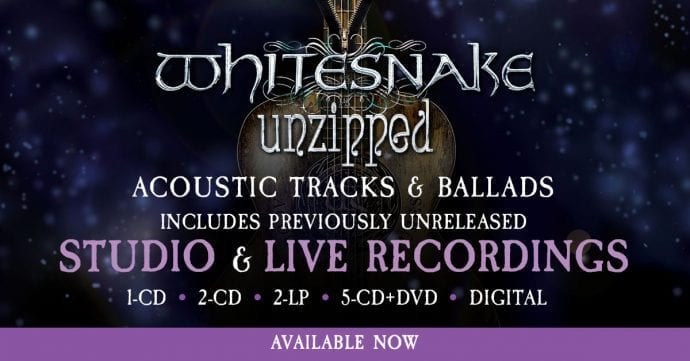 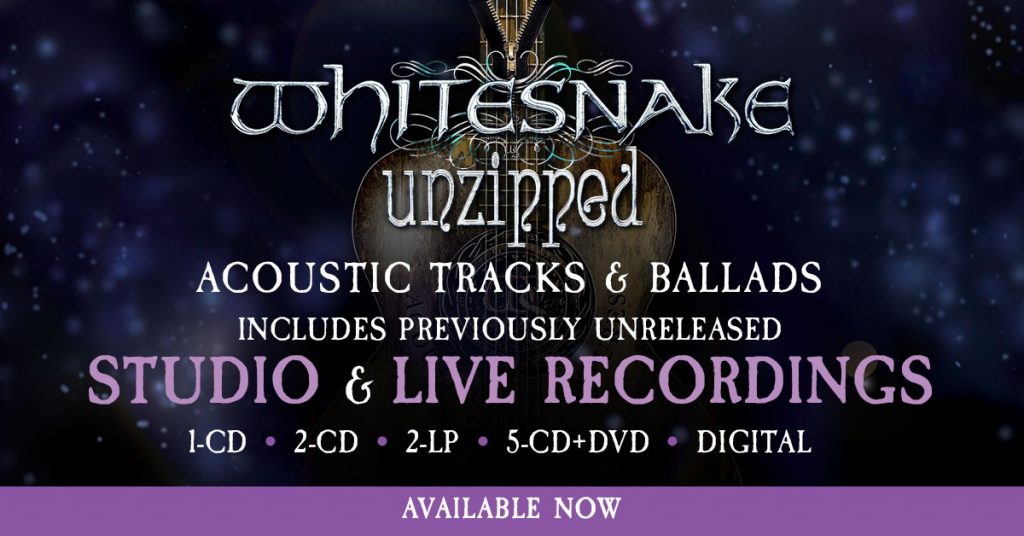 5CD/DVD Set Highlights Rare And Unreleased Acoustic Performances Recorded Over The Past 20 Years, And Includes The North American-Debut Of Starkers In Tokyo

LOS ANGELES – It was the hard rocking sound of hits like “Still Of The Night” and “Give Me All Your Love Tonight”that brought Whitesnake worldwide, multi-platinum success. Even so, the band’s founder and lead singer, David Coverdale has never been a stranger to the occasional ballad, going back to his early days with Deep Purple on “Soldier Of Fortune” and, most famously, with Whitesnake on the 1987 #1 smash hit, “Here I Go Again.”

Unboxing by David Coverdale
The UNZIPPED: SUPER DELUXE EDITION 5 CD/DVD collection brings together unplugged and acoustic-based performances recorded over the past 20+years, including rare and unreleased studio and live recordings, acoustic demos, concert videos, interviews and more. The extensive set is now available. Rhino has also released UNZIPPED in three other formats: single-CD, double-CD, and double-LP. All of the music is available digitally and via streaming services.

The first disc from UNZIPPED: SUPER DELUXE EDITION mixes rare and unreleased versions of songs like “Summer Rain” and “Forevermore” from the band’s recent studio albums – Good To Be Bad (2008) and Forevermore(2011). Also included are songs like “Love Is Blind” from Coverdale’s solo album, Into The Light (2000); and a previously unreleased song, “All The Time In The World.” All 11 tracks are available on the single-CD, double-CD and double-LP versions of UNZIPPED.

In 1997, Coverdale and guitarist Adrian Vandenberg played an unplugged concert in Tokyo that was recorded and initially released exclusively in Japan as Starkers in Tokyo. That recording has been remixedand will make its North American-debut on the second disc of UNZIPPED: SUPER DELUXE EDITION. The acoustic performance touches on the different stages of Coverdale’s career, from his time in Deep Purple (“Soldier of Fortune”), to his solo albums (“Too Many Tears”), and, most famously, with Whitesnake on unplugged versions of hits like “Is This Love” and “Here I Go Again.” These 12 tracks, along with all the music on the single-CD version of UNZIPPED, will also be available on double-CD, and double-LP.

“Some of my favourite love songs are on disc one of this collection… and I LOVE, love songs,” says Coverdale.“Though reluctant at first to go “unzipped” in public, the shows I did with Adrian Vandenberg in 1997, and then Doug Aldrich in 2006, were incredibly memorable. Primarily because it gave me an opportunity to be ‘at one’ with the crowd… some songs ask for a softer touch… and those are the songs we have here in this collection.”

UNZIPPED: SUPER DELUXE EDITION has even more of unreleased, unplugged recordings, including more performances from Coverdale’s 1997 tour with Vandenberg, plus several later shows featuring Coverdale and guitarist Doug Aldrich. Plus, more than two dozen of Coverdale’s unreleased, acoustic demos are also included in the collection.

A DVD completes UNZIPPED: SUPER DELUXE EDITION with live, unplugged performances filmed around the world between 1997 and 2015, including a complete acoustic show recorded at the Cutting Room in New York in 2008. A highlight for U.S. fans will be the North American debut of the 1997 concert video, Starkers In Tokyo, which has been remixed in 5.1 and Stereo exclusively for this new collection. Additional bonus features include an interview with Coverdale and Vandenberg, bootleg videos, the “Love Is Blind” music video and a slideshow.

Coverdale continues, “These songs are some of the most personal I’ve been involved with through my almost five decades as a professional musician, singer and composer…This is me at my most unguarded… innocent… writing, as I still do, for the fun… the expression… the poetry… all LOVE songs.” 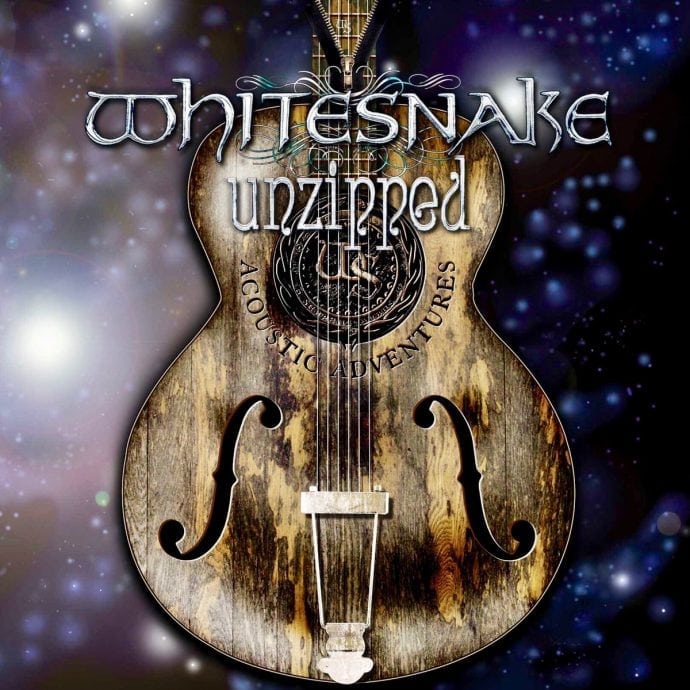 New Snakey Goodness For UNZIPPED in Our Store! 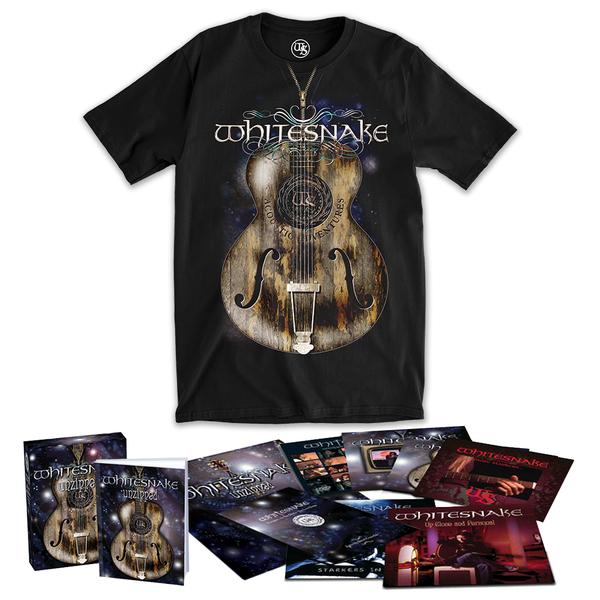 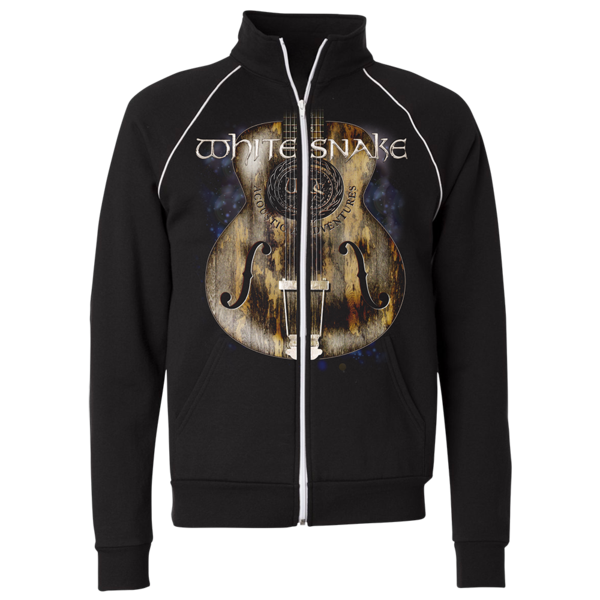 Disc One: Unzipped… In The Studio: The Love Songs

12: Fool For Your Loving (excerpt)